The cry of the guard or stationmaster accompanied by the crashing of the ‘slam’ doors of railway carriages was quite common when I was young. But it took on a new meaning for me one day in 1963 when I was sixteen and took my first steps out in public dressed en femme.

My father was in the Royal Air Force, stationed at RAF Stradishall in Suffolk — basically in the middle of nowhere; six miles north of Haverhill (pronounced “HAYvril”  — not “have er hill”) and thirteen miles from Bury St Edmunds. It’s now HMP Highpoint, so named because it’s the highest point in East Anglia. Winters were bitter here — there was nothing between us and the Russian Steppes and our house was on the eastern edge of the married quarter patch.

Back then it was the RAF’s No 1 Air Navigation School flying Vickers Varsity and Gloster Meteor aircraft.  At that time I wanted to join the RAF myself as a pilot. I was in the army cadets at school so dad was able to arrange ‘air experience flights’ for me in the Varsity trainers — I even took the controls for a few minutes on one occasion. If you look at the Varsity picture, you can probably make out a bulge underneath the fuselage; this is the bomb-aiming position. As you can see from the interior shot, there is a Perspex window through which to aim. I used to spend a lot of the flights lying down there watching the countryside slip by about 10,000 feet below.

A bus went from ‘Strad’ to Bury — and I do mean ‘a’ bus; it would do the trip via the villages near the A143 taking nearly an hour to get there, then turn round and, after a short break, meander back to Strad. There was no service to Haverhill and a couple of buses on (I think) Wednesdays and Saturdays to Newmarket.

At this time, I would ‘dress’ in my mother’s clothes whenever I got the opportunity — but never outside the house. That had to be rectified. I’d acquired a small collection of clothes of my own usually from donations for scout/ guide jumble sales. As the senior scout within the group, I was authorised to get the key to the hut, virtually next door to our house, from the Guardroom.

I would, however, need ‘hair’ — mine was short as befits the son of an RAF Warrant Officer — and shoes.

Those shortcomings were rectified by a shopping trip to Bury-St-Edmunds. Woolworths sold hair pieces with a plastic grip you stuck in your own hair. Two of those flowing over the

Below: bomb aiming compartment where I spent many hours on ‘air experience’ flights

At Cambridge, I caught the mainline train to London Liverpool Street.

Mainline UK trains in those days tended to use corridor coaches with toilets at each end which were not overlooked by other passengers in the compartments. So it was relatively easy to slip into one of these toilets and get changed while the train was moving. I then timed my exit to coincide with another stop - so that it looked as though I had just got on - rather than let people wonder where I had been since leaving Cambridge. 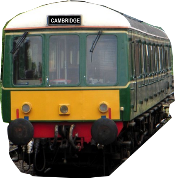 At Liverpool Street Station in London, I took the underground to Piccadilly Circus in the heart of the west end and walked around the shops. Nobody took any notice of me - but, then, in those days transvestism was virtually unheard of.

While I was there, it started to rain; I saw some ‘pac-a-macs’ in the ‘Left Luggage’ sales shop near Piccadilly and bought one. It was absolutely dreadful — hard crackly plastic in a leopard skin design — but it was cheap and all I could afford.

On the way home, I was going to change again in the toilets on the train when a ticket inspector called to me - I thought I was in trouble so ran to the next carriage I was scared stiff that he’d realised what I was!

Two years later, I joined the RAF as an Officer Cadet. Sadly, my hopes of being a pilot had been dashed because I’d admitted having had hay fever — but I was offered the chance of a ground commission . I was 18 and had taken my ‘A’ levels when I joined in September 1965. If I’d been accepted for aircrew training, it would have been a three year training course, giving me more time to mature. As it was, I had just 2 months preliminary training, 3 months main officer training then trade school before I would be put in charge of a group of men. It wouldn’t be enough, they’d have torn me apart and the RAF recognised it. I was told to get a job meeting people for a year then reapply.

Dad had been posted to Aden in the meantime and my mother and sister were due to join him. I took the opportunity to find a job in London and live on my own — giving me the freedom to dress whenever I wanted when not at work.

I had to work on Saturdays so had a half day each week when I’d do my shopping — typically taking a train from Liverpool Street to Chelmsford and changing in the toilets. A couple of times I saw a former classmate on the platform at Chelmsford. The second time he was closer to the carriage I was using. Had he seen and recognised me? I have no idea.

Other times, I would take the tube to Waterloo then catch a train back to Vauxhall station. The platforms at Vauxhall were on an elevated section of track above a busy road junction — the booking office was down at ground level and few staff were around on the platforms themselves. The carriages on the suburban Southern Region trains had individual compartments rather than the corridor carriages used on main lines. If I got a compartment to myself (not difficult during off peak periods) I could change my appearance between leaving Waterloo and arriving at Vauxhall.

In the summer of 1966 (I’d have been 19 then), I bought a “Rover” ticket which allowed unlimited travel on the Southern Region and I spent each day heading off in different directions. One of these trips was to Bournemouth where I walked along the front and took the ferry across to Studland where I sunbathed and swam in an orange bikini which I’d bought from Goringes department store on Buckingham Palace Road (long since defunct).  While sunbathing, I realised that a guy was hiding in the dunes watching me.  I quickly dressed and left.

But what if I hadn’t noticed him?

What if he hadn’t minded that I was trans?

Then, maybe, my debut novel “Summer Dreams” wouldn’t have been fiction.

You can read the first chapter here, on my website,

See what you think and, if you like it, you can buy it from Amazon as either a paperback or e-book — or as an e-book from other on-line retailers.

back of my head and covered with a scarf (commonly worn back in the 60s) gave a reasonably convincing appearance. The shoes were had a small heel, probably about one to one and half inches high and a black mesh upper that ‘gave’ a bit so fit quite well.

I already had my own basic make-up so I was now ready to go.

I’d completed my GCE ‘O’ levels by then so didn’t have to attend school.

One morning I walked over to the bus stop and caught the bus to Bury with my kit in a duffle bag. Then it was a short walk to the railway station to catch the diesel railcar for the next stage of my journey to Cambridge.

I dived into the first toilet in the next carriage and changed back into my male things as quickly as I could.  I emerged to find the inspector coming along the corridor “Could I see your ticket please,” was all he said.

This might have put me off using trains for a long time - if not dressing at all! But it didn’t.

In fact trains, and railway stations, eventually became one of my favourite places for changing.

I’d wear a dress or a skirt and blouse (and undies and tights) under my trousers and a bulky jacket. As soon as the train started moving, off would come my shoes, socks and trousers and jacket which I’d then stuff in my duffle bag; I’d straighten my skirt and put on my wig. I’d powder my face and apply lipstick — all in the four minutes before the train pulled in to Vauxhall. I would have chosen a compartment that stopped next to the ladies toilets and I’d dart inside and finish doing my make-up.